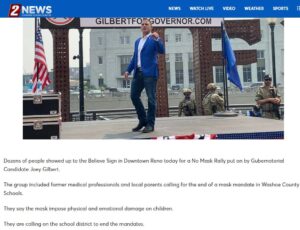 In Reno over the weekend, Nevada (R) candidate for Governor, Joey Gilbert, held a No Mask NO Mas rally in downtown Reno. Local Reno news KTVN Channel 2 reported “Dozens of people showed up to the Believe Sign in Downtown Reno today for a No Mask Rally put on by Gubernatorial Candidate Joey Gilbert”. The only picture in KTVN’s story is of Gilbert on stage.

Channel 2 News desk told 36 News, they only sent one photographer and perhaps the full crowd wasn’t there yet at that time.

Joey Gilbert’s campaign spokesperson said “The crowd was well over 600 people.” They went on to say “Channel 2’s gross understatement of the crowd size was intentional and a continuation of their ongoing efforts to misrepresent Conservative positions and Joey Gilbert specifically”.

Reno Attorney, Joey Gilbert, has been an outspoken critic of Gov. Sisolak’s mask, vax and CV19 polices from the beginning, even successfully suing the Governor on behalf of Churches illegally shut down.

Gilbert has a rally in Las Vegas scheduled for this weekend August 29. 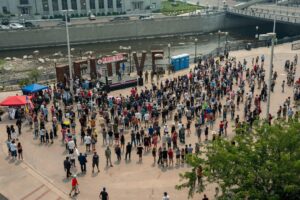 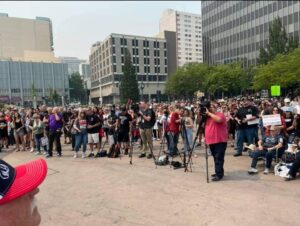 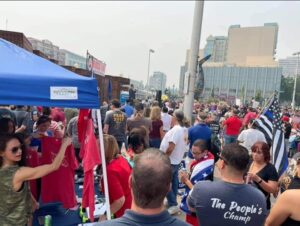