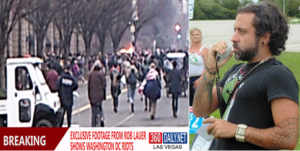 Dane Powell, 31, was arrested along with 233 others on January 20, 2017 in Washington D.C. for rioting, burning a limo and damaging local businesses on President Trump’s inauguration day. Powell pled guilty in April 2017 to rioting and assaulting a police officer. Superior Court Judge Lynn Leibovitz sentenced Powell to 36 months in prison today.

Powell cried like a baby in court stating “I stand before you today asking for forgiveness for anyone who was scared, hurt or felt threatened by me on that day,”.

Rob Lauer was there on the ground recording the domestic terrorists looting and burning a limousine while wearing black masks and gloves to hide their identities.