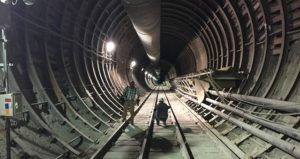 This week at the Keystone Luncheon, Nevada Senator Dean Heller made it crystal clear that he will not support renewed efforts in Washington D.C. to re-start the Yucca Mountain nuclear waste storage facility. But the Chicago Tribune’s editorial board in an opted pressured President Donald Trump Tuesday to clean up the nuclear waste storage mess left by President Obama.

Senator Harry Reid was successful for the past 10 years as the Senate majority leader at shuttering Yucca Mountain. But with Reid and Obama gone, Nevada’s failure to support Donald Trump in the recent election and loosing most of our Congressional Republicans, there seems to be little standing in the way of new efforts to open Yucca Mountain to nuclear waste. In fact, there is over $150 million in Trump’s budget to kick start Yucca Mountain.

The main objection for many Nevadans is the high risk of an accident, either in transporting the waste and/or in storing the waste here among 2.8 million residents. Any accident would put at risk our money machine, the Las Vegas Strip. News of any such nuclear accident in Nevada would certainly scare aware millions of tourists from around the world.

First, no conservative can truly support this plan because it means trusting the Federal government do get it right the first time and every time. Anyone who actually trusts the Federal Government to not F# this up only needs to look back a few years at the Federal Government’s inability to build a website for Obamacare. They spent a 1,000 times what Google or Microsoft would have spent to build a similar website only for it to be a complete ClusterF. But hey we should trust the same people to transport and store nuclear waste in our community.

Second, there is almost a 100 percent chance statistically that over a ten period and dozens of train trips there will be an accident.

Third, the need to transport and store nuclear waste is outdated. “Nuclear fuel reprocessing is performed routinely in Europe, Russia and Japan. Nuclear reprocessing technology was developed to chemically separate and recover fissionable plutonium from irradiated nuclear fuel.[1] Reprocessing serves multiple purposes, whose relative importance has changed over time. Originally, reprocessing was used solely to extract plutonium for producing nuclear weapons. With the commercialization of nuclear power, the reprocessed plutonium was recycled back into MOX nuclear fuel for thermal reactors.[2] The reprocessed uranium, which constitutes the bulk of the spent fuel material, can in principle also be re-used as fuel, but that is only economical when uranium prices are high. Finally, a breeder reactor is not restricted to using recycled plutonium and uranium. It can employ all the actinides, closing the nuclear fuel cycle and potentially multiplying the energy extracted from natural uranium by about 60 times.[3][4]“

For most Nevadans, it’s just not worth the risk.

But there is a security threat posed by the storage of nuclear waste in multiple locations scattered across the country. It’s obviously easier to protect the dangerous materials in one location rather than hundreds throughout the US. And yes for Nevadans this is a case of not in our back yard. But some have proposed that if the US government paid every Nevadan five or 10 thousand dollars per year to store the waste, like in Alaska for oil, then it would be far easier for us to accept the risks.  Either way this fight is now on and we need to decide how to meet the challenge.