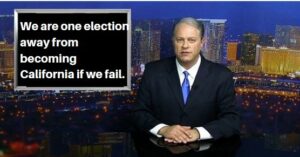 In 2014, the Republican Party successfully won the Governorship, both houses of the State Legislature and all the constitutional offices. They ran on an anti-tax agenda, running against the Gross Margins tax ballot initiative, which ended up losing by 82%. Led by NV State Sen. Michael Roberson and Governor Sandoval, they betrayed us and passed the most liberal agenda in a generation. The Republican RINO’s passed the largest tax increase in the state’s history, a $1.3 Billion new tax on businesses. Then they passed driver’s licenses for illegal aliens.

A civil war started in the party between the RINO’s and those of us who actuallly believed in the principles they ran on in 2014. The RINO’s, joined by the Democrats in the legislature, easily passed their agenda. But over the next two election cycles the RINO’s went down, taking the party down with it. Or did they?

In 2016, then, candidate Trump changed everything. Trump’s candidacy energized the Party base so much that over 70,000 Republicans turned out to vote in the caucus, more than double the number who came out for Romney in 2012. But the RINO’s in Nevada refused to go quietly into the night. A few weeks before the 2016 Presidential election they all came out, stood together and declared their objection to Candidate Trump. They failed to stop President Trump, but their efforts help the Democrats win Nevada’s legislature back. They also finally exposed themselves as the traitors they all were. They all stood there with Mitt Romney literally said they preferred Hillary Clinton to be President over Donald Trump.

Every one of them lost their elections and or re-elections.

Adam Laxalt ran for Governor in 2018, and his first decision was to choose the traitor Michael Roberson to be his Lt. Governor. This entitled son of a U.S. Senator ignored the Republican base voters. Roberson lost to “none of the above” and now Steve Sisolak is our Governor. BTW Laxalt ran on “increasing public education spending by $500 million”, not cutting taxes or protecting our rights or helping business. No, Laxalt ran on more tax money for Clark County Schools.

Only one Republican leader actually saw the light and hung his future and our country’s future on Donald Trump, Micheal McDonald. But he is way too nice a guy and as State Party chairman he has tried to herd the cats instead of learning to use his power as Harry Reid has, by striking in those who refuse to support the President. Everyone likes him and no one fears him.

But there is hope now of rebuilding our party. Instead of focusing on registering new voters from California, we need to focus on motivating our base voters to get out and vote as they did for President Trump in 2016 in the caucus. We have enough Republicans to win every major office in the state, if only they would get out and vote. But to their credit they haven’t had any real leaders in this state to vote for in some time.

Most of our politicians, especially in Nevada, haven’t learned the lessons of Trump’s victory in 2016, people are hungry for bold leadership. They want leaders who will fight for our future, our families and our freedom. There is hope for our Republican party to rise up and fight, but we must be smarter, tougher and wiser. The Democrat media and the RINO’s will do everything to destroy any Real Republican who tries to take back Nevada. We must put aside our petty differences, come together and fight including fighting those the voices within our own party who want to defend RINO traitors. We must fight as if our very lives depend on it, because they do. We are one election away from becoming California if we fail. We are one election away from the slavery of socialism if we fail.