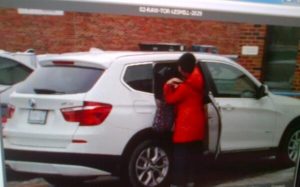 Woman gets out of $50k BMW to pick up EBT card

the set of attitudes and policies characterizing or tending toward the establishment of a welfare state.

April 14, 2017
/
Tomorrow millions of Americans will mail in their tax returns and with it a check for thousands of dollars. And tomorrow millions of American will mail in their tax returns and receive a check from the federal government for thousand of dollars, money they didn’t earn, called “The earned income tax credit.” The name itself is purposely deceptive, because to “earn it” all you need is a pulse.
/
If your household has two children and you make zero dollars a year, in other words you are already living on welfare, you can receive $5,572 in more free money. So the people who work hard and pay their taxes get nothing, but those on welfare get over $5,000 of FREE money. That is Welfarism. But Welfarism isn’t just limited to the poor. Rich people have figured out how to grab FREE MONEY recently as well.
/
If you are a real estate agent and pocketed a million dollar commission last month, but you have no deals closing for the next 30 plus days, you qualify for food stamps. And many rich people are jumping on this legal scam. The state food stamp offices have BMW’s and Mercedes lining the parking lots and under the food stamp rules its all legal. Its part of the new Welfarism. The Democrats know that if they can open the welfare doors to everyone, then people who usually hate the idea of welfare now have a new attitude toward the policy. There’s nothing like FREE MONEY to persuade people to support your policies.
/
Those rich people who think they are scamming the system out of FREE MONEY are really the same people paying twice as much in taxes now on that million dollar commission. Something public schools forget to teach our citizens is that there is no FREE MONEY. By accepting the FREE food stamps they have really accepted the new Welfarism loosing far more than just their hard earning money, they’ve lost their freedom. FREE MONEY from Welfarism is as dangerous as crack cocaine and as we see just as addictive. Welfarism has destroyed every society that has embraced it throughout history. Once voters understand they can vote themselves other people’s money the jig is up.
/
The Bernie Sanders supporters and their quest for FREE COLLEGE, FREE HEALTH INSURANCE , FREE EVERYTHING are falling for the same bullshit the people of the Soviet Union, Eastern Europe and Venezuela fell for. FREE SHIT is never free, you always pay for Welfarism in the end.
/
Rob Lauer
Political Reporter
360Daily.net