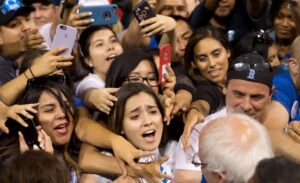 Hopefully yesterday was a wakeup call for Republicans across the State of Nevada to get engaged, start donating money and time to Republican candidates and even perhaps to “Moderate” Democrats, if there are any left in the State.

There used to be actual moderate Democrats in Nevada. For example in 2010, Democrat Ross Miller ran for reelection for Secretary of State. He received an “A+” rating from the NRA. That’s now a huge negative for Miller who’s considering running for Clark County Commissioner. Sure Dems have supported raising taxes on the edges but now they want to raise the minimum wage to $22 an hour ultimately and redistribute any money left in business owners’ pockets.

The 2019 Democrat dominated Nevada Legislature saw some truly radical proposals, but most were watered down by moderate Democrats. But after yesterday’s Nevada Caucus where Crazy Cali Commie Sanders supporters crushed all the competition, including Biden and Steyer who spent $50 million in Nevada, moderate Dems are an endangered species.

Even though The Culinary Union refused to endorse Sanders, a huge number of their members voted for the socialist, even after he promised to do away with their lavish healthcare plans. Over 30% of Nevada voters are now Hispanic, and well over 60% of the Culinary Union is Hispanic. This group really came out for Sanders.

But Republicans in Nevada are disorganized, full of in fighting and back stabbers. The Clark County Republican Central committee raised no money in the last quarter and can barely pay for one office. The Clark County Dems had 17 offices in the last election. Right now there are 587K registered Republicans and 698K registered Democrats in Nevada. These numbers reflect the influx of some 300K people from California, mostly working class folks looking for cheap housing. But they don’t seem smart enough to figure out that the polices of Cali Dems caused the houses costs to sky rocket in Cali. So they vote for the same kind of radical Dems here in Nevada.

And all of this is made worse by Fake Republicans who vote like Democrats for more taxes and driver’s licenses for illegal aliens, destroying enthusiasm in the Republican Party base. For far too long, political consultants have chosen controllable losers to run for office in the Republican party. We desperately need successfully people, like Pres. Trump, who can help fund their own campaigns and will vote for what’s best for our folks, not what the lobbyists want.

Yes there is a silver lining, Trump will drive Republican turnout this November, but long term that doesn’t help us win back the Governor and legislature in 2022. The fact is we have the numbers to win elections if our folks donate money and time and work together. But we are our own worst enemy. We have one election left, 2022. If we fail to win in 2022 all will be lost in Nevada to the Crazy Cali Commie Sanders supporters. If Nevada falls, there will be few places to move to. We need to make our stand here and now together.