SHOULD MILLIONS OF ILLEGAL ALIENS FROM CALIFORNIA DECIDE THE PRESIDENCY? THE ELECTORAL COLLEGE WORKED AS DESIGNED

SHOULD MILLIONS OF ILLEGAL ALIENS FROM CALIFORNIA DECIDE THE PRESIDENCY? THE ELECTORAL COLLEGE WORKED AS DESIGNED 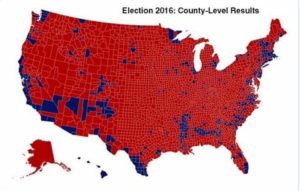 Democrats continue to whine about Hillary winning the popular vote but loosing the Presidency to Donald Trump, so when you dig into the numbers, you can see that California delivered Hillary her majority.

California has become a one party state. This last year California implemented motor voter which automatically registered everyone with a driver’s license or State ID, even legal residents and illegal aliens. The ruling Democratic party failed to put into effect any safeguards to prevent non citizens from being registered.

As reported by John Merline in Investor’s Business Daily:

To those unschooled in how the United States selects presidents, this seems totally unfair. But look more closely at the numbers and you see that Clinton’s advantage all but disappears.

While Clinton’s overall margin looks large and impressive, it is due to Clinton’s huge margin of victory in one state — California — where she got a whopping 4.3 million more votes than Trump.

But California is the exception that proves the true genius of the Electoral College — which was designed to prevent regional candidates from dominating national elections.

In recent years, California has been turning into what amounts to a one-party state. Between 2008 and 2016, the number of Californian’s who registered as Democrats climbed by 1.1 million, while the number of registered Republicans dropped by almost 400,000.

What’s more, many Republicans in the state had nobody to vote for in November.

There were two Democrats — and zero Republicans — running to replace Sen. Barbara Boxer. There were no Republicans on the ballot for House seats in nine of California’s congressional districts.

Plus, since Republicans knew Clinton was going to win the state — and its entire 55 electoral votes — casting a ballot for Trump was virtually meaningless, since no matter what her margin of victory, Clinton was getting all 55 votes.

Is it any wonder then, that Trump got 11% fewer California votes than John McCain did in 2008? (Clinton got 6% more votes than Obama did eight years ago, but the number of registered Democrats in the state climbed by 13% over those years.)

If you take California out of the popular vote equation, then Trump wins the rest of the country by 1.4 million votes. And if California voted like every other Democratic state — where Clinton averaged 53.5% wins — Clinton and Trump end up in a virtual popular vote tie. (This was not the case in 2012. Obama beat Romney by 2 million votes that year, not counting California.)

Meanwhile, if you look at every other measure, Trump was the clear and decisive winner in this election.

The electoral College worked as designed by those evil white men in 1787 to prevent one large state from dominating national elections. The United States is a Constitutional Republic and not a direct democracy which actual protects everyone’s civil rights from mob rule.