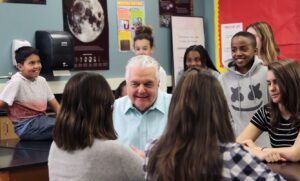 Today, Nevada ranks literally 50th in the nation in education. After four years of continued failure in our public schools by Gov. Sisolak, the liberal Dems that run the Clark County Teachers Union (CCEA) have had enough. Even after Sisolak promised to give them raises, the CCEA just announced they are withholding their endorsement. That’s like the NRA withholding its endorsement for a redneck hunter running for game and wildlife commission.

In a press release, the CCEA made it extremely clear what they think about Sisolak.

“In the 2018 gubernatorial election, CCEA supported Steve Sisolak. We helped him win the primary and go on to win the general election. Sisolak has a record and it was important to know what he was going to change moving forward. This moment requires State Leadership to step up, and collaborate strategically with School Districts, if we are to seriously address the issues facing our educators and students. We expected to hear a plan to address these issues over the next four years; and we did not. Accordingly, CCEA cannot support Steve Sisolak for reelection and will not be making an endorsement in the 2022 Governor’s race.”

Sheriff Lombardo, obviously is thrilled by the CCEA’s no endorsement and issued the following statement:

“Steve Sisolak has failed our kids, our educators, and our schools for far too long. Our schools are unsafe, our students are failing to meet basic academic benchmarks, and our teachers have a poor quality of life. Unlike Steve Sisolak, Sheriff Joe Lombardo has a plan to fix Nevada’s broken education system, and he will immediately work to bring safety, accountability, and empowerment to our schools.”

Now we know why all Sisolak can do is talk about abortion.