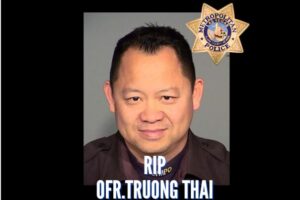 This morning, Metro Police Officer Truong Thai was murdered by a convicted criminal in possession of a firearm while responding to a domestic dispute. The murder occurred near Flamingo and University Drive, a problematic area with several weekly hotels, homeless people, and high crime. 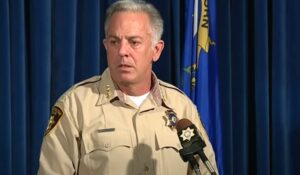 Sheriff Lombardo, who is running for Nevada governor, navigated the presser without any overt political comments:

“He’s an honorable officer, a commendable officer. He’d done a fantastic job as part of the law enforcement community through his tenure here.” 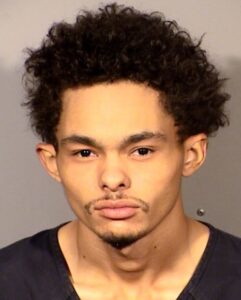 The alleged killer is Tyson Hampton, who was charged in 2020 with drawing a Deadly Weapon in threatening, a manner, a Misdemeanor, and Assault, with use of deadly weapon a felony. According to court records, it appears he was involved in a domestic dispute at the time he drew his Glock 19. He was ordered to stay away from two females. Hampton pled to one misdemeanor plus:

But one cannot ignore that this cop killer is just the latest in a string of violent criminals given multiple chances under the Dems’ failed criminal justice reform. Under the guise of reducing the number of blacks in prison, Dems have consistently ignored the high risk a young violent man like Tyson poses. Yes, it was his first offense, but the fact that he drew and aimed a firearm should have been a red flag. But in our plea bargain woke factory, race is the primary issue, not the offense or risk to innocent people they will hurt if released.

BTW according to prosecutors I’ve spoken with, the only reason they have to plead so many folks out, is because liberal judges refuse to sentence convicted criminals to real prison time even if they take the cases to trial. And, the system is overwhelmed by serious cases. Clark County Courts has over 400 murder cases currently pending. That’s 3 years of trials without addressing any other cases. It’s a great time to be a criminal, especially if you have the juicy to pay powerful criminal defense lawyers. 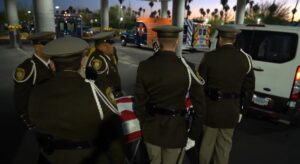