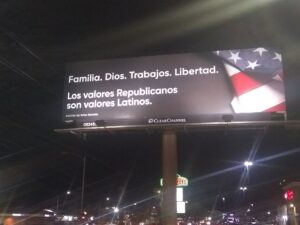 While sitting at a red light on Nellis Blvd. this Spanish language billboard caught my attention. While I can’t read Spanish, (even though I took Spanish in high school twice) I certainly could make out the word “Republicanos”. I took a few pictures and went home and translated the billboard.

They are Latin values

Hispanics have shifted over the last 4 years in huge numbers away from the Godless, Trans, Woke Dems towards the Republican Party.

“…the Democrat margin among Hispanics contracted by 8 points between 2016 and 2020. This drop was almost entirely among working class Hispanics”

But unfortunately, the Republican party is still too scared to fully embrace the Spanish version of itself and take on the social and political cold war the Dems are waging against our society. It seems that Republicans are more afraid of what the media thinks about them than what their party base voters think about them. The last Repub Governor, Brian Sandoval, changed the men’s and women’ public restrooms in the State Office Building to gender-neutral bathrooms.

Not one candidate running today in Nevada is even mentioning transgender school curriculum in their TV ads fearing media backlash.

Hispanics showed up in force at the CCSD District meeting a couple of years ago when they were debating transgender bathrooms in our public schools. They are 100% against any such perversions of our culture.

Republican candidates are hiding from the barrage of abortion ads the Dems are using to distract from their historic failed governance. Instead of fighting back and calling out the extreme abortion positions that Democrats fully support, Republicans are on the defensive.The Dems are actively campaigning and attacking clinics that offer an alternative to abortions. Dems support abortion up to birth for any reason. They oppose any parental notification for minors. Dems in Nevada actually passed a law that protects any adult that takes any minor to get an abortion, including sex traffickers and pimps. In 2019, the Dems passed SB179.

The new law repeals the requirements for a physician to certify in writing that the patient gave their consent freely without coercion and age verification. Worse, the state decriminalized people who are unqualified by state standards to give abortions using medications or instruments and shielded witnesses from testifying about these nearly state-sanctioned, dangerous black-market abortions.

Most Americans, not just Latinos still value God, Country, Family, Jobs and Freedom. It’s a winning message for all races.