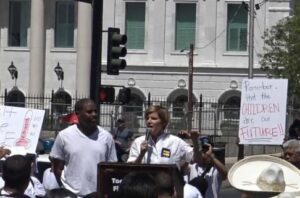 Word for Word without edits from Congresswoman Susie Lee.

As I promised before my vote to support an impeachment inquiry, I carefully considered and reviewed all the facts and evidence presented by the respective committees, witnesses, as well as the Constitution and the Articles of Impeachment themselves. After weighing all of the facts, I voted to impeach the President. I took an oath to uphold and protect the Constitution from all enemies, foreign and domestic. With this vote, I honor that solemn oath.

Based on the evidence gathered by Congress, despite systematic obstruction by the Executive branch, it’s clear the President committed two impeachable offenses: abuse of power and obstruction of Congress. First, the President used the power of his office to bribe a foreign government to investigate a political rival and interfere in our upcoming election, thereby threatening our national security. As a taxpayer, it’s fair to ask why Ukrainian aid is so important to U.S. national security. The answer is this: America has a vital national security interest in countering Russian aggression. Our ally, Ukraine, is quite literally on the front lines at war with Russia. U.S. military aid is critical to Ukraine in this war. The U.S. has successfully kept foreign aggression off American soil for over two centuries. But by illegally withholding taxpayer funds to support our ally, the President set a precedent that will not only have consequences in Ukraine, but in our dealings with corrupt dictators across the globe.

Second, the President categorically and comprehensively obstructed Congress’ investigation into his conduct. Under the President’s orders, witnesses refused to testify, defied congressional subpoenas, and refused to produce relevant documents or participate at any time during the investigation. Further, he intimidated witnesses to cover up his illegal behavior by threatening to ruin their careers. The Constitution guarantees checks and balances so all three arms of government – Executive, Judicial and Legislative – have co-equal power. By blocking Congress from learning the facts, the President undermined a fundamental pillar of American democracy.

When you put the facts together, it’s clear that the President put his personal political interests above our national security, our free and fair elections, and our constitutional system of checks and balances. Democracies live and die by the integrity of our elections. We have lived in relative peace for over two centuries in the strongest democracy on earth. It is my constitutional duty to ensure it stays that way.

You have my word that I will keep working to address the problems facing Nevada families: expanding access to health care, improving our schools, lowering prescription drug prices, keeping our community safe from gun violence, and supporting our nation’s veterans. The stakes are too high to put that work on hold.

Be assured that I will never stop fighting for you and the best interests of every Nevada family. I did not come to Congress hoping to impeach our President. I fully understand the honor of serving you in Congress, and that is not a privilege I take for granted.

Thank you for placing your trust in me.