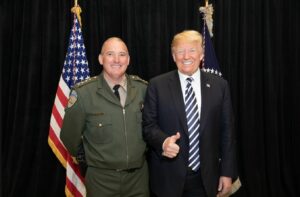 Humboldt County NV- Humboldt County Sheriff Mike Allen is officially the first Sheriff in Nevada to join the lawsuit filed by NevadansCan seeking to block the Red Flag Law passed by the Nevada Legislature in 2019 on a straight party line vote. The Red Flag Law is set to go into effect on January 1, 2020.

On December 4, 2019 NevadansCan, a Nevada Public Policy Nonprofit Group, filed a lawsuit in District Court in Carson City seeking an injunction to block the Red Flag Gun Law. The Red Flag Gun Law allows a Judge to order the Sheriff to remove guns from a person’s home without a hearing, without due process, without any criminal conviction and without a jury.

Sheriff Allen said “I took an oath to protect the constitutional rights of all my citizens and I take my oath to heart. As Sheriff, that sometimes means fighting crime and sometimes that means fighting unconstitutional laws in court. After listening to my citizens and the concerns of our community, I decided, to join the fight and file this lawsuit to stop the Red Flag Law passed over the objections of every county sheriff in Nevada. I have the upmost respect for our legal system as a member of the law enforcement community and I will respect the court’s decision at the end of the day“.