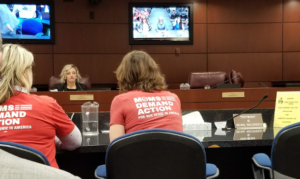 In a recent online survey conducted by the Nevada State Legislative, out of a total  of 3,389 respondents to the opinion poll, 3,146 opposed the Red Flags Bill and only 243 voted in favor of the Red Flag Bill. So over 73% of those who took part opposed AB291 and only  7% were in favor.

In a surprise hearing on May 29, the Nevada Senate Judiciary Committee in Carson City passed Assembly Bill 291 (AB 291) with an additional amendment reflecting the controversial Red Flag Law.

The Bill, originally introduced on March 18, 2019, by Assemblywoman Sandra Jauregui (D), entitled “AN ACT relating to public safety; prohibiting certain acts relating to the modification of a semiautomatic firearm; reducing the concentration of alcohol that may be present in the blood or breath of a person while in possession of a firearm; revising provisions relating to state preemption of the authority to regulate the transfer, sale, purchase, possession, carrying, ownership, transportation, storage, registration and licensing of firearms, firearms accessories and ammunition; providing penalties; and providing other matters properly relating thereto,” initially contained no language pertaining to the debated Red Flag Law.

When the Bill was first presented to the Assembly, it sought to criminalize modifications increasing the rate of fire in firearms, addressed minimum storage requirements of personal weapons and decreased the legal concentration of blood alcohol (as it pertains to firearms) from 0.10 to 0.08 grams per 100 milliliters.

With less than 24 hours’ notice to the senators at the hearing, the Red Flag Law was introduced Wednesday morning with 14 additional pages of amendments pertaining to Extreme Risk Protection Orders (ERPO) in compliance with Gifford’s Law, a law allowing family, law enforcement and others in “intimate relationships” to request the limiting of access to firearms for citizens deemed a serious or imminent threat to themselves or others.  Assemblywoman Jauregui began the meeting by stating, “I believe this policy can change lives.”

Approximately 50 people attended the hearing in Carson City, with representatives of those who support as well as those who oppose the Bill; a live feed was shown in Las Vegas for those who wished to provide public comment.

Section 8 of the proposed Bill empowers those family members or law enforcement officials to request an ex parte (in the interest of only one side) order from the courts for the removal of firearms from the home or custody of the antagonist in a domestic situation or to preempt a crime.  Supporters of the Bill claim other states such as Maryland and Oregon with Red Flag Laws have been successful in preventing suicides and mass shootings.

With supporters ranging from Everytown for Gun Safety, Bill Sponsor Assemblywoman Jauregui to Moms Demand Action for Gun Sense in America, their sentiments were echoed by one another as each one spoke.  Alyson Giles, a volunteer for the Nevada Chapter of Moms Demand Action for Gun Sense in America made a statement emphasizing the three critical components she interprets the Bill as accomplishing, “Empower loved ones and law enforcement to seek protection; provide a mechanism to prevent harm, instead of waiting until it happens; and create a fair process for the courts to consider issuance.”

Giles goes on to claim recent polling “shows that 70% of Nevadans support a strong Extreme Risk Law, such as this one.”  However, the Nevada State Legislative site reveals total respondents to their opinion poll as 3389, with 3146 against and only 243 in favor of the Bill, making it 7% in favor.

Comments opposing the Bill on the opinion site include, “NO! THIS IS AMERICA, LAND OF THE FREE!!!!!”, “The website says Nevada Legislature, the peoples (sic) branch of government. Why aren’t (sic) you listening to the people? AB291 does nothing to stop crimes related to firearms. How about enforcing current laws on the books for prosecutions? How about tackling mental health issues that cause mass shootings? Why is it that when someone commits acts of atrocities with a firearm, good people are punished? I want answers as much as you do, but emotions should not overrule common sense and logic, and stripping people of due process and their rights! Good people will fight anyone who are pushing these bills, and has accepted Bloomberg money. You have used unethical tactics, and practices not related to good governance! Fulfill your oaths and protect the rights of the people!” and “The red flag amendment, added quite dishonorably, has not stop shootings from mentally unstable people (see latest California shooting), places citizens and police in danger (see Maryland man killed by police using red flag law), will not stop suicides (we should use already in place psych orders if it’s that serious), and is a full assault on our rights to due process and our second amendment rights. This bill is ripe for abuse and could be used to target minorities and other underprivileged people. Accusations are not enough to confiscate our property.”

Those in support are concluding, “It’s just common sense” and “While I would go further in protecting us from guns, I am very strongly in favor of this Bill. Please keep exploring additional ways to “reasonably” regulate guns for our safety. Perhaps palm print recognition requirements?”

Senators Ira Hansen (R) and Keith Pickard (R) articulated they wished they had more time to review the new elements with Senator Hansen asking for the discussion to be tabled until everyone had the chance to read thoroughly and be more prepared. Senate Majority Leader Nicole Cannizzaro (D) and Chairwoman of the committee declined to allow more time, instead choosing to delay the beginning of the hearing for almost an hour as the Senators reviewed the amendment.

Speakers opposing the Bill outnumbered those in support by approximately three to one and ranged from representatives of the NRA, a police officer, former military and many private citizens.

Public comment was varied, but had essential elements of concern for a few key elements:

Janine Hansen, Director of Nevada Families for Freedom, reiterated what other citizens had proclaimed by explaining we should “hold the person responsible and quit blaming the gun.”

Senator Pickard appeared to agree when he commented we should be “addressing the needs of those who are mentally ill.”

The ever outspoken Senator Hansen questioned some of the more ambiguous verbiage of the Bill asking, “Do all the firearms in the house have to be removed?” Hansen used an example of a family living with adult children when a child might be subject to the law and inquiring whether or not the entire family would lose their Constitutional rights to protect themselves by having all firearms removed from the home. The answer given by Andrew from Everytown was less than satisfactory with a standard quote of “any firearm in the person’s custody, control or possession”.

With eight Senators, three Republicans and five Democrats, the Bill was passed and will now move on to the entire Senate for a second reading, then for a third reading and to the General File for a final vote then on to the Governor, since it was amended it will also go back to the Assembly for Concurrence where it passed the first time.

To read the entire Bill with the additional language please go to:

To view the opinion count and comments please go to: