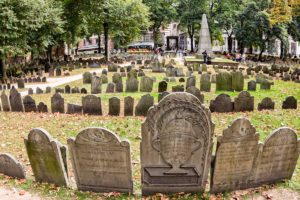 Boston, Granary Burying Ground is the final resting spot of countless heroes from the American Revolution. As we celebrate the 4th of July today, let’s also celebrate the sacrifice of twenty five thousand Americans who died fighting the British Empire 241 years ago against incredible odds that only with God’s help could they have overcome.

I joined the US Army in 2005 in the middle of the Iraq war. As I stood there at the end of basic training, on our last day, at night, with a bond fire, in formation with my brothers in arms, my drill sergeant stood before me, shook my hand and gave my coin declaring me an American Soldier. I realized right there and then that I was now part of that small group of Americans from 1776 all the way thru today, that stepped forward to serve their nation. I was ready and willing to lie down with them in that cemetery for all eternity.

So today let’s honor their memories by celebrating our nation’s birth and enjoy our hard fought freedom. Today, before the fireworks, have your kids sit on your lap and tell them the story of America. Then let’s enjoy this moment in history as free people, on this 241’st 4th of July.

The Granary Burying Grounds contains approximately 2,345 gravestones and tombs, although it is estimated that 5,000 people are buried at this site. The grave markers are predominantly slate, with a few in greenstone or marble.

The gravestones’ original haphazard configuration was rearranged into straighter rows over to the years to accommodate both nineteenth-century aesthetics and the modern lawnmower. During the mid-nineteenth century, many landscaping projects were undertaken in the Granary, including the installation of pedestrian walkways and the planting of shade trees and shrubbery.

The remains of thousands of Boston citizens and notables lie within the walls of the Granary. Along with Massachusetts governors, mayors and clergymen, visitors will find the graves of three signers of the Declaration of Independence: Samuel Adams, John Hancock, and Robert Treat Paine; Peter Faneuil, benefactor of the famed downtown Boston landmark; patriot and craftsman Paul Revere; James Otis, Revolutionary orator and lawyer; and five victims of the Boston Massacre. Near the center of the ground, a 25-foot-tall obelisk commemorates the tomb of Benjamin Franklin’s parents.”