DID SISOLAK DRUG BAN LEAD TO MORE DEATHS VS. OTHER STATES?

DID SISOLAK DRUG BAN LEAD TO MORE DEATHS VS. OTHER STATES? 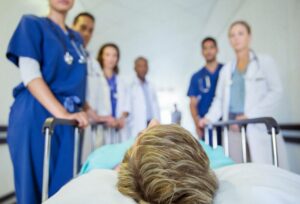 Looking at states with a similar numbers of cases of COVID-19, including South Carolina, Alabama, Mississippi, Utah, and Rhode Island; Nevada, so far, has the worst mortality rate. Certainly mortality rates can be affected by testing, medical protocols, quality of medical and health facilities ect. But Utah stands out as having the most aggressive policy towards using hydroxychloroquine.

On the same day, March 23, 2020, that Gov. Sisolak signed an Emergency Order banning doctors from prescribing hydroxychloroquine OUTSIDE of hospitals, Utah Gov. Gary Herbert did the opposite. Once a patient filled out an online questionnaire they could get hydroxychloroquine dispensed outside of a hospital setting.

As reported in the Desert News:

SALT LAKE CITY — Utahns who pass an online screening would be able to get malaria drugs at a pharmacy to treat the new coronavirus under a standing order currently being drafted, Utah Department of Health Deputy Director Dr. Marc E. Babitz said Monday.

“I’ve seen enough evidence of benefits to make it worth trying,” Babitz, a family physician, told the Deseret News, adding he doesn’t agree with critics who say there hasn’t been enough study yet on the use of hydroxychloroquine and chloroquine in treating the symptoms of COVID-19.

“In a situation like this that we’re in today, I disagree with my academic colleagues. If we weren’t in a crisis, if this wasn’t a major concern, a worldwide pandemic, I’d say, ‘You know what, let’s wait. Let’s wait. Let’s find some people who have this. Let’s do that double-blind, placebo controlled, they call it crossover trial,’” he said.

Utah went one step further and actually purchased $1 million worth of raw chemicals to make hydroxychloroquine back on March 23, 2020.

Mississippi Board of Pharmacy also restricted hydroxychloroquine to hospital admitted patients only on March 24, 2020. The mortality rate is close to Nevada’s.

Rhode Island left it up to Doctors to decide based on best available data. They too have an extremely low mortally rate of 49 dead.

Alabama government said “Pharmacists should use their professional judgment when filling prescriptions for hydroxychloroquine and chloroquine.”

South Carolina restricted Physicians from prescribing hydroxychloroquine for themselves and families as a preventive measure but did authorize the drugs for use outside hospitals on March 25, 2020.

Within less than a month, Utah has shown aggressive use of hydroxychloroquine worked and saved lives with only 17 dead verses Nevada’s 102 dead. That’s what happens when politicians listen to Doctors instead of well-meaning bureaucrats.

The numbers as of today according to worldometer. 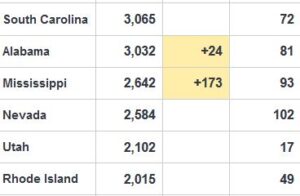