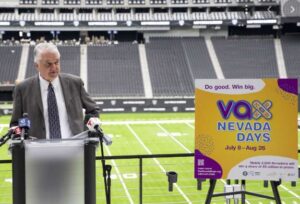 After raising mining taxes last month, with thousands of folks still waiting for their unemployment to kick in, with small business waiting on pins and needles for their CV19 relief funds still, Gov. Sisolak announced that he is giving away $5 million in federal CV19 relief money to folks who already got the jab. Because of gaming interests, Nevada does not have a lottery like most states. It’s strictly forbidden under Nevada law. Even raffles are strictly limited.

Sisolak’s illegal lottery “makes all state residents who have received at least one vaccination since December automatically eligible to receive part of the $5 million prize money.” Sisolak calls his lottery “Vax Nevada days”.

Sisolak’s illegal and corrupt VAX Lottery doesn’t fail under benefiting charities since getting the jab financially benefits Pharma companies like Pfizer who announced $3.2 Billion in profits off jabs in the first quarter of 2021. BTW According to public campaign finance records, Sisolak and Dems have received hundreds of thousands of dollars in campaign donations from Pharma.

(b) Shall expend the net proceeds of a charitable lottery or charitable game only for the benefit of charitable or nonprofit activities in this state.

(a) The expenses incurred in the operation of the charitable lottery or charitable game; and

(b) The amount and use of the net proceeds of the charitable lottery or charitable game.

NRS 462.250  Penalty for unauthorized lottery.  A person who contrives, prepares, sets up, proposes or operates any lottery, except as authorized pursuant to this chapter, is guilty of a gross misdemeanor.

“Vax Nevada Days” will be paid for with federal CV19 relief dollars Nevada received to help businesses. With small business failing by the hundreds and with thousands of folks about to be evicted, giving away $5 million to folks who already got the jab to benefit Pharma companies is corrupt.