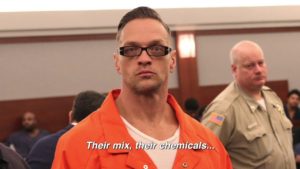 On July 11, 2018, after over a year of litigation that spanned the Nevada Supreme Court and back, two time convicted killer Scott Dozier was scheduled to be executed at 8pm. A jury found him guilty in the murders of two men. Dozier cut their bodies up and stuffed them in suit cases before disposing of them. According to reports yesterday, Dozier committed suicide in his cell.

In 2017, Dozier waived his appeals and told the court that he wished to die. The judge signed his execution order June 2018. But, at the last minute, in the morning around 11am on July 11, 2018, Judge Gonzales sided with 2 drug makers who filed a last minute motion seeking to block Dozier’s execution. The drug makers objected to their drugs being used, claiming it would hurt investor and customer relations. BTW their stock prices went up since the drug was identified as the ones to be used in Dozier’s execution.

According to prison sources, the drugs were purchased through the normal course of business using the pharmacy computer online ordering system without any objections from the drug makers at the time. However the Drug makers did issue a notice that they objected to their drugs being used for execution shortly thereafter. But the drug cocktail had been reviewed the courts and ultimately approved by the State Supreme Court for over a year at that point. 360 News reported the DOC had the drugs in question over a month earlier.

According to a press release issued by the Nevada Department of Corrections there was no effort made to file an emergency motion with the Nevada Supreme Court to overturn the lower court’s July 11, 2018 ruling.

Nevada Attorney General Laxalt’s lawyers failed to call prison staff as witnesses at hearing who could have clarified for the court the process used to obtain execution drugs. Staff was later called to testify and did admit to ordering the drugs over the objection of the drug makers.

Imagine saying your good byes and mentally preparing to die and then hours before you expect to die, the court says oops not today. Our bad. Clearly, the efforts by the Anti-Death Penalty crowd tortured Dozier so much so he was on suicide watch for months in solitary confinement.