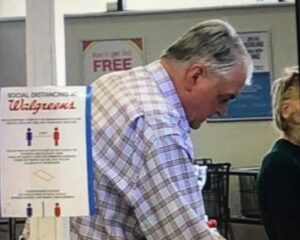 On May 26, 2020 numerous Nevada news outlets reported that Gov. Sisolak was exposed to a person with COVID 19 while visiting workers at a government office building.

According to news reports, Sisolak was exposed the week prior to telling the public on May 26, 2020.

An Official Statement issued May 26, 2020 by Gov. Sisolak’s office read:

“Late last week, I visited a work place where an employee, who was not in the building at time, has since reported testing positive for COVID19. My Office learned of the positive test result on Tuesday,” Sisolak said on Twitter. “I am scheduled to take a COVID19 test on Wednesday and I will inform Nevadans of these results. At no point since the potential exposure have I experienced any symptoms.”

The governor’s office reported that Sisolak’s test came back negative. Hydroxychloroquine is known to block CV19 as well as being an effective treatment.

According to a person working at a pharmacy in May, following Sisolak’s exposure to CV19, he purchased a two weeks supply of hydroxychloroquine. In fact, on May 25, 2020, 360 News posted a picture of Gov. Sisolak in the checkout line at a Walgreens. The post received an enormous amount of views because the Governor wasn’t wearing a mask.

Back in March, Gov. Sisolak issued an order banning hydroxychloroquine from being prescribed in Nevada until a person was on death’s door in a hospital. And to this day, it’s still banned in Nevada, even after numerous doctors filed lawsuits seeking to lift Sisolak’s ban.

As Governor, Sisolak meets numerous folks every day. So his potential exposure to CV19 is extremely high. The are reports that numerous leaders across the US are taking hydroxychloroquine to protect against CV19.