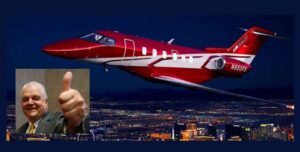 Nevada Governor Sisolak just called for an emergency special session to address the self-imposed financial crisis created by the Governor’s CV19 shut down order and now extension. Sisolak is expected to ask for a huge tax increase. The state currently owns two private jets worth about $1 million total. Last year, Governor Sisolak, through his Nevada Department of Transportation (NDOT) ordered 2 new jets totaling $14 million for the State of Nevada to use to fly government employees, including the governor from Carson City to Las Vegas. The new $14 million planes were purchased with gas tax revenue according to official legislative budget reports.

With the State of Nevada officially on the brink of Bankruptcy, Sisolak still refuses to cancel the purchase of his two new Jets totaling $14 million and to sell the current Nevada state private jets. According to sources at NDOT, the new planes have not been delivered to the state from the manufacturers.

Sisolak and his Rat Pact of Democrat State Governors, including California, Colorado, Washington State and Oregon together are demanding $1 Trillion from Pres. Trump to bail them.

360 did some research and found that the PC-24 fuels costs, on average, are the same and the hourly costs were about the same as the U.S Built Citation CJ4. Both the PC-24 and the U.S. built Citation CJ4 use the same engine, the Williams International FJ44-4A. Its the Williams engines that deliver the bulk of the savings in terms of fuel and overhaul costs. BTW Williams has a program to refit NDOT’s current Citation II with new Williams engines for around $2 million.