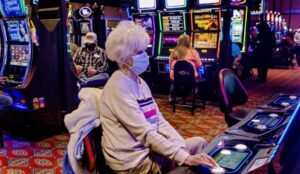 As reported by the Oklahoman: by Adam Kemp:

NORMAN — The line to get inside Thunderbird Casino stretched nearly 250 people long.

Inside, guests’ temperatures were taken at the door, masks were handed out and guests were told they had to wear them while they sat at slot machines at least six feet away from the nearest fellow gambler. The bar was closed, but drinks were available as well as a limited menu from the restaurant.

For Jenny Mitchell of Purcell, Monday and the opening of her favorite casino could not get here soon enough.

Thunderbird Casinos in Norman and Shawnee did a soft opening Monday to allow patrons a chance to gamble on select slot machines.

State health officials have given strict directives for social distancing and disinfection, allowing restaurants to open dining rooms Friday after being closed for six weeks while movie theaters, churches and concert halls, gyms, salons and other businesses have all reopened. Bars are still closed, as are city playgrounds. Social gatherings of 10 or more people are still forbidden.

National health officials warn that anyone entering a large venue full of people in the middle of the COVID-19 pandemic must take safety precautions like wearing a mask and sanitizing properly.

“If we really want to keep our businesses open and we don’t want to see a spike in this and have to shut everything down again for another six or eight weeks, we’ve got to cover our faces,” said Dr. Jeff Warren, a member of the COVID-19 task force. “My mask really doesn’t protect me. Your mask doesn’t protect you. My mask protects you and your mask protects me. So this is a politeness issue.”

Of the hundreds in line outside Thunderbird Casino on Monday, few came wearing masks. But casino staff, who were all wearing the face coverings, handed them out to all patrons who wished to enter.

From 10 to 11 a.m. the Norman casino was reserved for guests age 50 and older and quickly hit its reduced capacity of 250 people, roughly one third of its normal capacity, within minutes. The Shawnee casino had a capacity of about 125 people.

As the state continues to relax its emergency orders allowing for more and more businesses to open up and operate, Thunderbird general manager Sam Caruso said they wanted to get a jump on competing casinos in the metro area that are mostly waiting until May 15 or later to open their doors.

“We continuously paid our team members throughout our closure,” Caruso said. “Now that restrictions have been loosened, our whole team was anxious to get back to work.”

While masks were enforced by staff at the casino, patrons were still allowed to smoke once inside. One man, who refused to give his name, cut a hole through his paper mask to fit a cigar through it.

“We are taking a lot of things away from people and telling them they can’t do this, can’t do that,” Caruso said. “So we thought we might as well allow them to smoke. They can just pull their masks to the side while doing it.”

In Oklahoma, many tribal governments that shut down casinos in mid-March kept paying employees. The Cherokee Nation said it costs the tribe $30 million to $40 million a month to pay salaries and expenses while casinos and other businesses are shuttered.

While Thunderbird, which is operated by the Absentee Shawnee Tribe, decided it was going to open, other casinos have decided to wait until later this week or even later before opening their doors.

Chickasaw Nation Gov. Bill Anoatubby announced that the tribe’s 24 casinos would also remain closed until at least Friday. And when they do reopen, business will be conducted with extreme caution.

“Health professionals advise that recent measures enacted to help mitigate the spread of the virus are beginning to work because of widespread participation,” Anoatubby said in a statement. “Health professionals also advise to take a cautious approach toward reopening in order to preserve recent gains and prevent a resurgence in new cases.

“Therefore, our leadership team continues to monitor the data on an ongoing basis as we work to develop a comprehensive plan for a phased reopening of our operations while being mindful of protecting public health.”

The governor of the Cheyenne and Arapaho tribes said Monday that the six Lucky Star Casino locations will reopen Friday, but with strict social distancing, mask and sanitation efforts in place.

Many other casinos, including Riverwind Casino and Newcastle Casino, announced they would remain closed through Friday.

Sac and Fox Casinos will also remain closed until at least Friday, as Principal Chief Justin Wood said in a Facebook Live chat that it was too early for the state to reopen.

“Now is not the time to end social distancing,” Wood said. “We will continue to watch the impact reopening Oklahoma has on human life.”

For Caruso, the line out the door is a sign people were eager for a little fun. He said he isn’t sure how long they will implement the social distancing and mask protocols, but predicts it will last a long time.

“It’s hard to predict,” he said. “Definitely at least the next couple weeks this way before we slowly turn more machines back on.

“But who knows, it could be limited like this forever.”