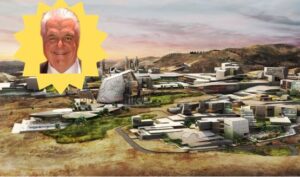 Last week, out of the blue, Gov. Sisolak promoted the “Innovation Zones” proposal advanced by cryptocurrency Blockchains LLC founder and CEO, Jeffrey Berns. The idea is for corporations to buy large swathes of desert and build company owned towns which would include their own governments.

Company towns are nothing new. History is full of company towns fraught with human rights abuses. The Plantations Slaves lived on in the South were essentially company towns. Mills in the US and England were often company towns filled with child labor and where the workers could only buy from the company stores.

Berns already owns more than 67,000 acres of land in rural Storey County. Berns wants to develop “Painted Rock Smart City” over the next 75-years, which would include an estimated 36,000 residents using his block chain cryptocurrency.

But since when do Democrats support privately own company towns? Since this one gave a truck load of cash to Sisolak. According to public finance records, Berns and his company gave more than $161,000 to Sisolak Democrats, including to Steve Yeager and Kate Marshall.

But Berns has played it well giving to Republicans as well like Adam Laxalt and his PAC getting $60,000. Assemblyman Tom Roberts got $1,000  and Sen. Heidi Gansert got $2,500.