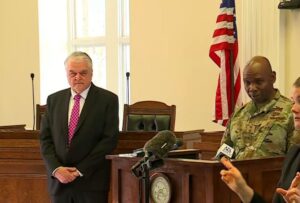 The Nevada primary is scheduled for June 9, 2020. Supposedly the stay at home directive issued by Gov. Sisolak will run out April 30, 2020. But Sisolak has ordered the primary election to be conducted by mail in ballot only. The DNC has been pushing for a mail in ballot election for weeks. President Trump responded referring to mail in ballot elections “there should be no mail-in voting in the U.S. and says voting should be done with voter ID in person. Trump says mail-in voting would encourage people to cheat.”

According to the Nevada Secretary of State’s office, county clerks will begin mailing out ballots April 24, 2020. With most folks stuck at home, campaign consultants expect a much larger number of people will vote and vote early. Meaning the election will be over for most voters once they mail in their ballots before the shutdown ends.

This puts a great number of candidates at a huge disadvantage losing the end of April and the month of May to campaign for votes. Only well funded candidates will be able to communicate with voters in the limited time frame. What’s even more concerning, is that mail in ballots post marked by June 9, 2020 will all be counted, allowing counties to count for up to 10 days. Counties must “certify the election results no later than 10 days after the election.”

When asked to site Nevada law that allowed such a radical action, the Secretary of States’ office admitted Sisolak had zero legal authority under Nevada law or the State Constitution to take this action.

One campaign consultant we spoke with said Sisolak’s directive is completely unconstitutional and should concern every Nevadan. What would have been lawful is; delaying the election by a few weeks if health and safety are truly a concern. “This stinks of politics”, said Republican Candidate for Nevada’s 3rd Congressional District, Mindy Robinson, “I stand with President Trump in calling for free and fair elections which includes voter ID.”

The Clark County registrar voter’s office argued that they needed to train poll workers this month in order to prepare for June’s election and doing so could put folks in danger. Sisolak has refused  to declare poll workers essential.

What’s even more perplexing is that the mail in ballot change extends to ever county, most of which have had zero coronavirus cases.

The fact that the Governor issued such a directive to convert the primary election to a mail in ballot for June 9, 2020 may signal Sisolak’s lock down may be extended much further out than April 30, 2020.

• Utilities as defined in NRS Chapter 704

construction on the Raiders’ Stadium