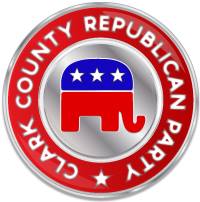 The Clark County GOP only raised a paltry $11,000 in the last 3 months of the 2016 general election. Since the 2016 election they have accumulated debts now totaling more than $30,000. The party does not even have enough dough to put on their annual Christmas party. The annual Lincoln Dinner may be held in a park with hot dogs, and you bring your own hot dogs they are so broke. Tonight the Clark County GOP board is meeting to figure out their next move. With major elections just around the corner there are serious concerns about the party’s ability to proper function going forward.