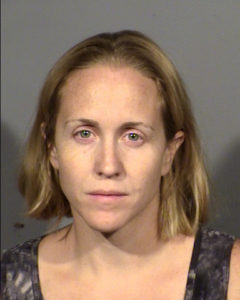 The only reason we are showing her mugshot is so the audience can see why we are asking the question?

Kathryn Navrides is already guilty in the eyes of the media and posting her mug shot across the valley’s media platforms is a clear violation of her right to a fair trial. And now many people are accusing the police of jury tampering. Federal Courts have barred the practice of releasing mug shots until a person is convicted. So what do the Sheriff and the prosecutor have to gain by publishing mug shots of people before they are convicted?

Kathryn Navrides may be guilty of child abuse and maybe she’s not. But if she is found innocent by a jury or the charges are dropped after further investigation, where can Navrides get her good name back?

It’s time to protect people’s Constitutional rights and that includes the Police. The police need to protect people’s rights or they should be liable for defamation for releasing mug shots if the person is found innocent or if the charges are dropped. The picture itself is a public character attack. All one has to do is read most of the comments below a typical mug shot to see the mob assumes they are guilty.

Just last month Bishop Gorman High School Football coach Kenney Sanchez’s criminal case was dropped after his ex-girlfriend recanted her accusation of domestic violence. But the media blasted his mug shot across the valley. He was suspended from his job for months while the case was pending. Where does Sanchez go to get his good name back? It’s time to stop the voyeurism, stop poisoning the jury pools. But once the person is convicted then it’s fair game to publish their picture.