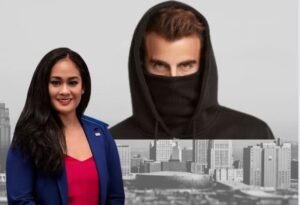 Mary Lim, mother of five kids and Republican Candidate for State Assembly District 34 by night and crime fighter by day, is calling for criminal enhancement laws for masked bandits. Mary Lim is a Nevada Probation Officer who deals with criminals every day. Lim told 360 News about Detectives sending her pictures of criminals wearing masks during robberies and other crimes, asking if she recognizes them.

Could you imagine before CV being allowed to go into a bank wearing mask and hoodie? Well it didn’t take long for criminals to figure that out either.

“If I’m elected to the Nevada State Assembly I’ll introduce a bill that will make wearing a mask during the commission of a crime a crime itself. While Dems want to blame guns for crime I blame masks for the explosion in crimes. Criminals wearing masks has created a public safety crisis.”

But Dems we spoke with refused to support such a law claiming public health concerns outweigh the temporary rise in crime.

360 News reached out to the sitting State Assemblywoman for District 34 Shannon Bilbray-Axelrod for her response.