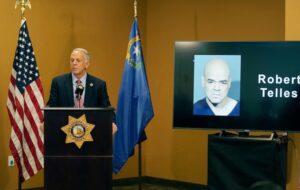 When things go wrong, we are all too quick to blame the police. But when things go right, we need to acknowledge good work. Yesterday, Clark County Sheriff Joe Lombardo held a press conference to announce the arrest of Clark County Public Administrator and Democrat Robert Telles in the murder of RJ Reporter Jeff German. After eight years of leading the Las Vegas Metro Police Department, this murder case was a make-or-break event for Lombardo’s campaign to defeat Gov. Steve Sisolak. His case to voters is largely about Lombardo’s competent leadership versus Sisolak’s disastrous leadership during CV19, stranding thousands of folks without unemployment for months after calling them non-essential workers.

Lombardo would have been blamed if the case had dragged on for weeks.

But Lombardo’s department did not disappoint. LVMPD acted decisively and with purpose. From the moment the 911 call came in on Saturday at 11 a.m., within days they had developed a suspect and executed a search warrant on Telles’ home, his bright red SUV, and his DNA. Five days after the 911 call, Las Vegas Metro Police made an arrest.

Sheriff Lombardo’s news conference was carried by every major news outlet in the country. It was a huge boost to his campaign to replace Steve Sisolak. Lombardo even skillfully swatted down a moronic liberal reporter who asked if Trump was to blame for the Democrat elected official murdering a local news reporter.

Las Vegas Metro Police’s performance in this case is the kind of thing I have experienced in my own life over the past couple of years as well.

While I have been an outspoken critic over the years of Clark County Sheriff Joe Lombardo on a host of issues and a complicated past, my personal experiences with Metro Police require me to give credit where credit is due.

This wasn’t the first time we saw Lombardo act decisively. Lombardo ordered hundreds of police to crush the Black Lives Matter riots in the summer of 2020 and protected small businesses. Sisolak thanked the rioters the day after a Metro officer was shot in the back of the head during the riots. 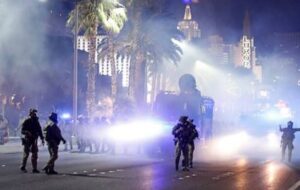 Two years ago, prior to CV19, I owned a business. Over the course of two weeks, we were robbed at gunpoint twice. The LVMPD detectives I met with were extremely professional and competent. Within a couple of weeks, they caught the guy.

A year later, I had a pickup truck stolen from my parking garage in the middle of the night. The career criminal had 10 prior convictions for car thefts and burglaries and was doing 10 years when Sisolak let him out early for CV. Within a couple of weeks, Las Vegas Metro and Henderson police caught the guy and returned my truck. Again, the officers I dealt with were dedicated professionals.

This year I have been developing a project in a rough part of town. LVMPD has helped us clean up the neighborhood and been true partners.

As a former U.S. Army Military Police officer, I understand that leadership is critical to good order and discipline in any organization, especially a police department with over two thousand officers.

Sheriff Joe Lombardo gets credit where credit is due for the success this week that made national headlines.