Metro Police reported an 88% increase in homicides and an increase of 50% in violent crimes in parts of town for the first half of 2016. Yet under Sandoval’s Sanctuary City policy here in Clark County, Metro Police are required to release illegal aliens back into our communities that have been arrested for violent crimes if they can afford to post bail. 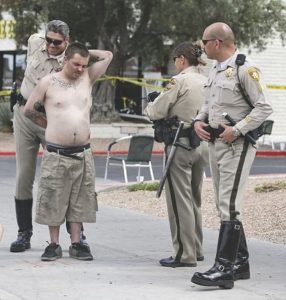 Governor Sandoval pushed hard for driver’s licenses for illegal aliens as part of his support for President Obama’s sanctuary city and amnesty policies. Sandoval refused to support legislation changing the policy in 2015 when the republicans controlled both the Assembly and Senate. According to Sandoval’s official campaign finance report he donated $800 to Hispanics in Politics, a group that advocates for amnesty for illegal aliens. He also received a donation from El Mundo Newspaper here in Las Vegas.

According to several polls Danny Tarkanian is leading the Republican field in early voting.

We spoke with Danny Tarkanian who said “We should block funding for all jurisdictions who fail to enforce federal laws. It’s absolutely ridiculous and shameful that Michael Roberson refuses to enforce our border laws“

Sandoval had no comment in response to this story by NEWSAMXTV.VEGAS