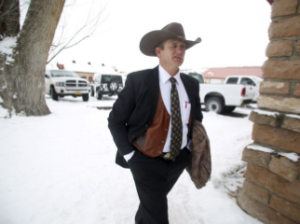 Today, candidate for Nevada Governor Ryan Bundy filed a lawsuit against the Federal Government regarding their prosecution of him and other family members claiming “malicious prosecution”.

Bundy retained Larry Klayman, the founder of Judicial Watch and Freedom Watch to represent him. Ryan Bundy spent two years in federal jail awaiting trial only to have the case thrown out after U.S. District Court Judge Navarro found Federal Prosecutors had failed to turn over numerous documents in Bundy’s case leading to a full dismissal.

The law suit alleges authorities engaged in an illegal search and seizure related to the cattle roundup, violated Bundy’s First Amendment rights and accuses federal officers of exhibiting a “deep animus” against members of the Church of the Latter-Day Saints.

Bundy has been running radio ads attacking Nevada Attorney General Adam Laxalt claiming Laxalt refused to lift a finger while he and his family sat in jail for two years without being convicted of anything. Bundy said Laxalt’s failure to protect his rights was one of his motivations for running for Nevada Governor as an Independent.