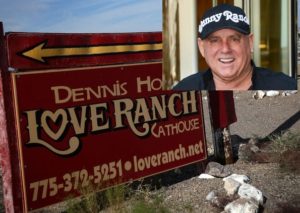 Less than a week after Dennis Hof died, his Crystal Nevada Brothel, The Love Ranch, just outside of Pahrump, closed its doors. Dennis Hof was found dead Tuesday morning in his bed at the Love Ranch Brothel just hours following a huge fundraiser at the Nugget Casino in Pahrump. The brothel was legally licensed under Hof’s name so now there is no licensee to operate the Brothel. The staff were given their final paychecks and sent home this week. According to sources, the Brothel may be put on the market soon.

Hof had plans to invest millions into the small desert oasis town next year including a new runway, hangers and luxury bungalows. Now its future is unknown. Just a few months ago Hof won a lawsuit in Federal Court to reopen The Love Ranch after Nye County officials illegally closed it.

Dennis Hof was running for Assembly District 36 and now his name will remain on the ballot following his death. If Hof wins the election then the county commissioners will pick his successor.

Hof’s autopsy results have not been disclosed yet, but a tentative funeral date has been set for November 3, 2018 in Carson City.