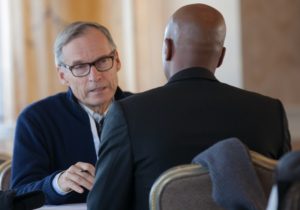 This week Clark County Public School Superintendent Jesus Jara attended a q & a with the Black Student Union at a local public high school where he was peppered with all the typical social justice questions. According to local reports, Black Student Union groups in local Clark County public high schools have grown from 8 to 32 schools. How is it legal to have racially biased exclusive groups in public schools? Can you imagine if a white, Christian, nationalist group wanted to set up clubs in our public schools?  Or just white or just Christian or just nationalist?

It’s time we stop with the black and Latino and women’s groups thing and just have Americans working together. And it’s not just the Democrat Social Justice Warriors doing it either. Republicans have jumped the shark and now have their own women’s and minority sub group clubs backing their tribe’s candidates. Just the other day I spoke with a woman who declared herself highly intelligent who then went on to tell me if she doesn’t know the people on the ballot then she just votes for the female candidate.

I’m the first generation in my family born in the U.S. I’ve served my country in the military and have been self-employed since I was 21 years old. I had great role models growing up. My grandmother was a super smart business woman who barley spoke any English. BTW she came to the U.S. legally. Role models matter. If we allow young people to be mentored by successful people regardless of race and gender then we will get more successful people. If we allow looser parents to be the role models, then we will just get more looser social justice warriors.

Perhaps instead of allowing and fostering grievance groups, our Public schools should form and support more Entrepreneur clubs and encourage successful people to mentor young folks regardless of their race and gender. Building young black, white and Latin boys and girls up with marketable skills, a work ethic and wealth building knowledge would be help empower the next generation more than any social justice whining about how unfair the world is.