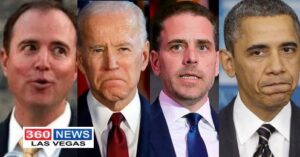 After the Democratic called 17 witnesses in the House Impeachment Inquiry it’s our turn. In the Senate trial only a simple majority is required to approve witnesses, including which witnesses are called.  This is the Republican controlled Senate’s chance to call Republican witnesses including the so called “Whistle Blower”, Hunter Biden, Joe Biden and of course Adam Bennett Schiff and his staff who claims they never met the Whistle Blower. And how about calling the man behind the curtain pulling all the strings?

So this should be a slam dunk vote for Republicans. But as usual the RINO’S are refusing to help President Trump’s lawyers in their defense. Of course the RINO’S are siding with the Dems, the liberal media and Washington DC powers.

This is why I fight so hard against this element in our party. People are policy. And the wrong people make the wrong polices. Ya see, all it takes are a few RINO’s to peel off and we lose.

The Senate trail is our chance to fight back. But of course RINO Republicans will do what RINO’S do best, surrender.