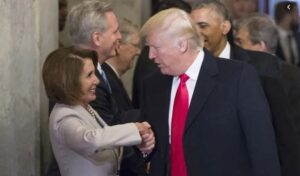 Washington D.C. Dems fear Hillary Clinton’s boundless ruthlessness. No one in the Democrat Party, or Republican party for that matter, inside D.C. dares to cross Hillary Clinton. Did you ever wonder why Republicans never really went after Obama and impeached him while he was in office for dozens of crimes? Because they were afraid of him. Remember when the Obama Justice Department indicted sitting Senator Robert Menendez, Democrat of New Jersey for opposing his foreign policy on Cuba and Israel? BTW the Senator is still in the Senate.

Republicans in the Senate are avoiding a direct confrontation with Joe Biden because he knows all their dirty secrets.

President Clinton, while in office, obtained secret FBI files on all the Senators and Congressman and threatened to use the files if he were ever convicted. He was acquitted in the Senate.

Whips in legislatures whip up votes by threatening to cut off money and support, even threaten to remove them from key committee assignments if a legislator refuses to support leadership’s bills. It’s standard operating procedure in every legislature in the country.

President Trump enjoys the public battles and Twitter wars with the Media and Dems. But the media and Dems take those attacks extremely personal. Dems and the Media have made destroying their political enemies a blood sport for decades with ruthless efficiency. Its also how they keep their own folks in line and scare Congressional Repubs into submission.

President Trump has been the target of the D.C. swamp from the beginning. Why? Because Dems don’t fear him. President Trump instead has been focused on getting work done and that means passing legislation like the China trade deal which he needs Dems in Congress to support and they know that. President Trump has made the calculation that getting stuff done will lead to his reelection, even while he fights thru the daily barrage of Dem and media attacks. So if he wants to get things done he cannot go after Dems and or their allies with indictments. After all Trump considers himself the world’s best deal maker. But with Dems, likes cats, sometimes you need to use the squirt bottle to get them to behave.

So if Trump had already indicted a hand full of people connected to spying on him and his campaign, Dems might have shied away from impeaching him out of fear. Dems are like a pack of dogs. You need to establish yourself as the dominant pack leader quickly or they will steal your food.

But it’s too late now for the President to indict any high level Dems after the impeachment. It would look like payback and the Dems would just impeach him again. And its an election year and it would look purely political to low IQ voters.

The real question is, will Trump really go after them in a second term?