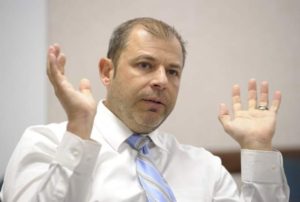 Carson City, Republican Minority Leader Paul Anderson is known as one of the most liberal Republicans in the Nevada State Assembly Caucus. Not only did Anderson lead the way two years ago to usher in the largest tax increase in the History of Nevada and he also killed campus carry. Anderson was the guy who convinced Republicans to vote for the Stadium deal without Educational Saving Accounts (ESA) last October.

Last October, a few weeks before the general election, when Republicans still controlled both houses of the Nevada State Legislature and the Governorship, they had the power to pass ESA’s after the Nevada State Supreme Court struck down the funding source but upheld ESA’s as constitutional.

But Assemblyman Paul Anderson promised Republicans he would get ESA’s funded in this 2017 session if they would just work with him on the stadium deal. But to date he hasn’t got squat. Now there’s rumors of a deal Anderson is pushing to screw small businesses again by trading a new $12 per hour minimum wage in return for ESA funding.

Last month Governor Sandoval and Republican Minority Leader Paul Anderson threatened to veto every Democrat bill if they refuse to pass ESA’s. Well that lasted about a Hollywood minute before Anderson and the Governor folded.

The session ends this Monday, so hold onto your wallets as the Nevada State legislature makes midnight deals hoping you aren’t paying attention.

Now Paul Anderson has those mean old Democrats to blame if ESA’s fail to pass. But we all know its Anderson’s fault if Republicans fail or worse if they trade away our party’s sole once again. Anderson holds a one or two vote majority in the Republican Assembly Caucus which will certainly evaporate if he fails to deliver on ESA’s this session.