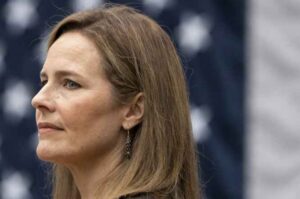 So many Republicans including Pres. Trump had high hopes for Justice Amy Barrett when she was appointed last year right before the November Elections. This week Injustice Barrett voted with the liberal majority to preserve Obamacare in a 7 to 2 vote. Texas along with several other Republican State Attorney Generals sued to overturn Obamacare citing the mandate as unconstitutional. Injustice Barrett voted against all the Election lawsuits brought by Pres. Trump and other Republicans following the steal.

But the writing was on the wall back then that she was RINO. 360 News wrote the following at the time:

Jacobson v. Massachusetts, 197 U.S. 11 (1905), more than 100 year old decision, not law, not science; forced a local man to get vaccinated for polio against his will. BTW back in 1905, Jim Crow laws were legal. Locking up a mentally ill person was legal. Segregation was legal along with a host of other scourges rejected by our generation. We seek a high Court Appointee who will reverse these horrid decisions, not honor them.

So this great constitutional scholar Judge Barrett supports lock-down mandates and government forced vaccines. There is nothing written in stone saying we must support this mistaken nominee who threatens our freedom and sides with Government’s most extreme power grabs. The law and the Constitution must prevail over past court decisions that violate basic rights like Jacobson. After this same court ruled run away free slaves had to be returned to southern slave masters in the 1800’s. Republicans seek judges that will overrule past liberal court decisions that violate our principles of law and order. Barrett wants to honor them by violating more people’s rights.

The Senate can and should vote no in the next 2 weeks and start over with a better choice. Perhaps next time we can remove the gender requirement from the nominee and just pick the best person for the job.

We must put aside the political partisanship and we must defend our constitutional against attacks from all quarters. We cannot support this nominee just because Pres. Trump was pressured by Washington insiders and think tanks to back her. If you like the lock downs and arbitrary CV19 rules, if you support government mandated vaccines then you will love Judge Amy Barrett. The fact is Amy Barrett is more aligned with John Roberts than Judge Scalia.