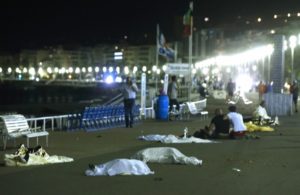 Last night in Nice, France, the twelfth radical muslim attack in less than two years killed some 84 people including 2 Americans and some 10 babies and kids in strollers. The attacker was killed by police (men with guns). And the attacker who drove a truck through a crowd also had a handgun. Of course in France only the police have guns so the people were literally sitting ducks with no way to defend themselves. A 31-year-old Tunisian-born Frenchman named Mohamed Lahouaiej Bouhlel was the terrorist according to French authorities. IS celebrated the attack on social media.

But not one local mainstream media outlet including the Review Journal, ABC, NBC and CBS used the words radical islamic or even muslim in their news stories. The trend continues of white washing terrorism from muslim migrants in Europe and here in the US, including the San Bernardino and the Orlando attacks carried out by radical muslims. But the liberal mainstream media keeps pushing for gun control and more muslim immigration from IS controlled territories.

As the liberals try to whitewash the radical islamic muslim terrorism, Donald Trump surges in the polls in key battleground states. Every new attack reminds the national of the the differences between Hillary and Trump. Hillary vows to continue Obama’s policy of importing muslims from the middle east and in fact announced she would import over a million more, while Trump has called for a ban on Muslims from IS controlled territories who cannot be properly screened.

With the mainstream media and most of Washington clearly behind Globalist Hillary and opposing Trump Nationalism, this election is set to determine if our country will defend it borders, defend its people and defend its security or continue Obama’s policies of open borders.