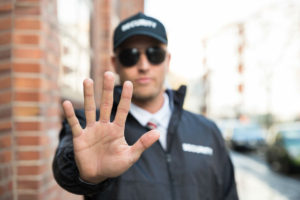 December 9, 2016, the security guards at the Mandalay Bay voted to unionize and joined The International Union, Security, Police and Fire Professionals of America, known in the industry as SPFPA and based in Roseville, Michigan. This was the first security guard Union to successfully unionize on the Las Vegas strip.

According to security experts, we spoke with, unionizing unarmed security guards provides them with job protection, which in turn makes it more difficult to fire lazy and poor quality security guards. Security guards already have an extremely high turn over without a union contract due to the nature of the work, low pay and employee sourcing.

On October 1st, one unarmed security guard at the Mandalay Bay was sent to the 32nd floor to investigate, supposedly, an open door alarm when he was shot by the shooter prior to the Vegas Attack killing some 58 concertgoers. According to now disputed reports, the Mandalay Bay guard radioed and called in the shooting. But what happened after that is now completely been confused by differing Police press conferences.

At this point, how the security staff reacted to the Vegas shooting attack is in disputed by Metro Police, the FBI, and the MGM Hotel. None of which can agree on what exactly happened as of today. The Police have not released any video from the Hotel hallway to date.

The question of whether unionization of Las Vegas Strip casino security guards is a good or bad idea made be determined partly by the outcome of the Vegas shooting investigation.