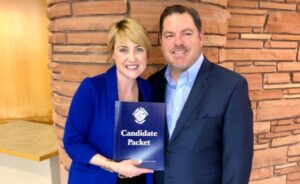 Besides Gov. Sandoval, the one person to blame for the demise of the Republican majority in Nevada is KING RINO, former Republican Majority Leaders and State Senator Michael Roberson. After Mike F### the state and the Republican party by leading the charge to pass the Commerce tax, the largest tax increase in the state’s history, yes a Republican did that, he then passed SB 303 which gave driver’s licenses to illegal aliens who are now voting in our elections.

But Roberson thought his screw job would be rewarded with gold and political power. He got the gold and never won office again. He lost to Danny Tarkanian even after out spending him in the Congressional District 3 race 5 to 1. Roberson then ran as Adam Laxalt’s Lt. Governor in 2018 causing the loss to Gov. Sisolak. Roberson was soundly rejected by the Republican base. In fact, if one ads up the votes Roberson received plus the votes for none of the above, they still didn’t add up to more votes than his Democrat rival received.

So where does Roberson go after that? He couldn’t win dog catcher now after his history. He put his wife forward to run who has a completely different name “Liberty Leavitt”.  But one look at her campaign donations and it’s the same old crowd of RINO’S giving her money. Liberty Leavitt is a liberal CCSD school bureaucrat who made over $137K, according to her latest reporting in Transparent Nevada. And of course the liberal school labor unions and bureaucrats, like the Clark Country Education Association, gave huge money to her campaign. She’s backed and endorsed by a bunch of social justice liberal unions and groups Roberson has his fingers in.

BTW Liberty was never ever at any Mike Roberson events, speeches or parades in the last ten years that I can remember, not one. According to serious sources, Mike Roberson has been retained by a teachers’ union for $250K to help get his wife, Liberty Leavitt, and others like Jeff Proffitt get elected to school board in order to raise our taxes.