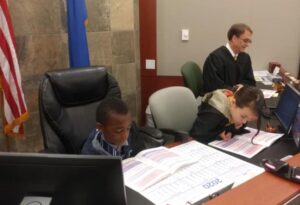 I have known Judge Scotti for over a decade and in all that time he has been a kind, honest, highly intelligent person and outstanding lawyer. Obviously he’s highly educated after attending USC law school. With Judge Richard Scotti, we don’t need to guess how he’ll rule when powerful interests stand in his courtroom demanding he bow to them.

When the Review Journal wanted a copy of a murdered police officer’s coroner’s report to publish the gruesome details, Judge Scotti refused their motion. Las Vegas Metro Officer Charleston Hartfield’s widow asked the court to protect his dignity and privacy. When most judges would have buckled to the powerful news outlet Judge Scotti stood his ground, ruled on the law which protects coroner reports from being published to the public without family consist. Officer Hartfield’s widow now stands with Judge Scotti and fully endorses him for reelection.

So when you see negative news stories about Judge Scotti now you know why; because he had the courage to stand up to them and say no.