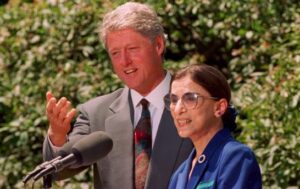 The only reason the Dem media are lionizing Ruth Bader Ginsberg is because she was a loyal party member. Ginsberg defended the Democrat party not the U.S. Constitution, every time. She always ruled in favor of big government over individual rights. She refused to accept the written words of the Constitution. Instead she argued the Constitution is “a living document” and must evolve with the times. In other words, its says what I say it says. But that is not the role of the Supreme Court. They are unelected, life time appointees who do not stand for elections ever. Laws are only written by those who can be held accountable by citizens at the ballot box, otherwise we have tyranny. And like most tyrants, they only leave on their backs.

She rule a white woman could be discriminated against by a University if it benefited Affirmative Action but a private  all male Military University could not maintain it’s all male campus. But all women campuses are still allowed.

Ginsberg perfected the grotesque argument that Governments have “a public interest” in pursuing certain policies even if those polices violate constitutional rights. She argued that no Constitutional rights are absolute, accept abortion.

Ginsberg was an enemy of the 2nd Amendment.

Congress can regulate guns in school under Commerce clause

In U.S. v. Lopez (1995), Breyer authored a stinging dissent, joined by Justices John Paul Stevens, David Souter, and Ruth Bader Ginsburg, defending Congress’s power to regulate the possession of guns in school zones across the nation as within federal authority over interstate commerce.

Right to gun ownership is collective, not individual.

Justice Ginsburg joined the dissent on District of Columbia v. Heller on Jun 26, 2008:

Overturning DC’s handgun ban, the court ruled that the Second Amendment protects the individual right to own a gun for private use–not only in connection with service in a militia. The 5-to-4 decision, District of Columbia v. Heller, left unanswered questions, but also much room for continued gun regulation, short of an absolute ban.

Justice Breyer filed a separate dissenting opinion that, even with an individual-rights view, the DC handgun ban and trigger lock requirement would nevertheless be permissible limitations on the right. The Breyer dissent concludes, “there simply is no untouchable constitutional right to keep loaded handguns in the house in crime-ridden urban areas.”

Ginsberg was a racist

Grutter v. Bollinger upheld the University of Michigan Law School’s consideration of race and ethnicity in admissions. In her majority opinion, Justice O`Connor said that the law school used a “highly individualized, holistic review of each applicant’s file.” Race, she said, was not used in a “mechanical way.” Therefore, the university’s program was consistent with the requirement of “individualized consideration” set in 1978’s Bakke case, O`Connor said. However, the court ruled that the University of Michigan’s undergraduate admissions system, which awarded 20 points to black, Hispanic, and American-Indian applicants, was “non-individualized, mechanical,” and thus unconstitutional. [Dissenting opinion held that any race-based balancing is unconstitutional; two dissenters suggested a 25-year time limit which should now be expired.]

When the University of Michigan Law School denied admission to Barbara Grutter, a female Michigan resident with a 3.8 GPA, she alleged that the Law School had discriminated against her on the basis of race. The University argued that there was a compelling state interest to ensure a “critical mass” of students from minority groups, particularly African Americans and Hispanics. The Supreme Court upheld the University’s admissions policy. Ginsberg voted to allow the white woman to be discriminated against based on her race.

The public schools in many of the poorer parts of Cleveland were deemed failures, and the legislature enacted the Pilot Project Scholarship Program to provide tuition vouchers for up to $2,250 a year to attend participating public or private schools. The parents chose where to enroll their children. In the 1999-2000 school year, 82% of the participating private schools had a religious affiliation.

Ginsberg ruled Obamacare was constitutional to compel citizens to enter into a contract with a private company calling it a tax.

Ginsberg found Constitutional rights where none were mentioned.

She voted for the right of gay people to get married overriding state rights.

Just this year she voted that the Civil Rights act of 1964 included LGBTQ employments rights, but again none were ever mentioned in the legislation.

Ginsberg voted just last month, the Gov. Sisolak could shut down or limit churches in Nevada while allowing casinos to remain open.

Ginsberg also ruled against any regulations of abortion providers. In the same breath Ginsberg ruled governments can regulate anything they want under the commerce clause.

Ginsberg ruled that foreigners applying from their country to enter the US have a constitutional right to a hearing in a US federal immigration court.

Ginsberg ruled the government can freeze any development on private property to protect an endanger animal without any compensation. Ginsberg also ruled governments could take private property if doing so increased the tax revenue. So a farmer could have his farm seized and turned over to a developer who wanted to build a shopping center because the sale tax revenue would be more.

Ginsberg ruled Obama’s executive order allowing the children Illegal aliens could remain in the US was Constitutional buy Trump’s reversal was Unconstitutional.