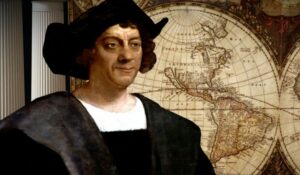 As the left continues their war on White Males like Columbus, someone forget to tell them that Christopher Columbus wasn’t “White”. He was Italian. In 1492, Columbus landed on various Caribbean islands that are now the Bahamas as well as the island later called Hispaniola. He also explored the Central and South American coasts.

Back then people believed the world was flat and Columbus proved them wrong through science and exploration. The courage it took to sale off into the unknown, possibly off the edge of Earth was brave beyond comprehension. His discovery led to the liberation of millions of Europeans subjugated by warring Empires. His efforts eventually led to the experiment called the United States of America.

Yes, the Indians in the new world refused to share their land and war broke out with the Europeans. BTW the Indians fought wars with each other and had slaves. The Indians were not all pipe smoking vegans. They had empires and fought to maintain their power over their territory. But that is the history of the world going back 5,000 years. People violently compete for resources and land.

But the real issue is Liberals in schools rewriting of our history and blaming the sins of the world on White Christian Men. Labeling all Europeans as “White” is actually very racists. Europeans are not all the same nor are they all white. Irish and Italians, Germans and Polish all have very proud histories and traditions.

So in the end, the liberals have exposed themselves again as the racists attacking heroes who actually built things, discovered things and actually challenged the common thought of the day, that the Earth was not flat.

Democrats today abuse science for their own political agenda and chastise anyone who challenges their conclusions. Columbus’ lesson is to always challenge the status quo scientists, because they are usually wrong. After all, in 1492 the majority of scientists believed the Earth was flat and Columbus proved them wrong. Sounds like Climate Change arguments today?