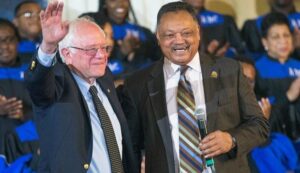 Just when you thought you were safe from Crazy Commie Bernie, he’s back with a powerful endorsement before the next big states vote. Bernie currently has 573 Delegates and Biden has 822 after you count Bloomberg, Mayor Pete, Warren and Klobuchar’s pledged delegates to Biden. Bernie clearly has struggled with the Democrat Black vote.

That’s why Jesse Jackson’s endorsement is a huge boast to Sanders and could help Sanders in Michigan, Mississippi, Missouri on March 10, and other states coming up with large Black voting blocks.

Jesse said in an official statement “With the exception of Native Americans, African Americans are the people who are most behind socially and economically in the United States and our needs are not moderate. A people far behind cannot catch up choosing the most moderate path. The most progressive social and economic path gives us the best chance to catch up and Senator Bernie Sanders represents the most progressive path. That’s why I choose to endorse him today,”

Jackson mentioned “The Biden campaign has not reached out to me or asked for my support, the Sanders campaign has, and they responded to the issues I raised.”

Biden’s past opposition to School busing and other civil rights legislation hasn’t hurt him with Black Democrat voters to date. But Jackson’s endorsement will make many Black Democrats voters take a second look at Sanders, especially if Jackson comes out swinging at Biden’s record.