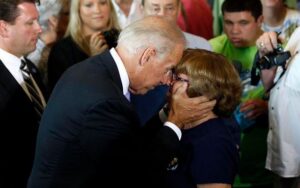 For the eight years President Obama was I office, every time a Republican criticized his polices, they would try and label them racist. And every time Trump attack Hillary Clinton they tried to label him a misogynist. Dems have used race and gender to fend off legitimate policy criticism for decades.

The Dems had a gay, a few women and a few minorities running for President. After all that the Dems are left with two old white rich dudes.

Now that the Democrats are left with two old white rich dudes as their standard barrier they can no longer fend off attacks as they have in the past. Sure Bernie tried to fend off an attack a couple of weeks ago claiming his never practiced religious affiliation.

Having Joe Biden, who has a long long videotaped, documented history of inappropriate grabby hands with women and kids and onset dementia seems like an easy target. But targets who are protected by the corporate national Democrat media outlets are not easy targets. But since the Dems were so desperate to defeat Sanders with anyone, anyone looks like he will win the nomination now.

A Biden candidacy gives Republicans an opportunity they haven’t had in decades, a political target with a ton of baggage and corruption to go after who doesn’t have the shield of being a minority or female gender. Perhaps if Joe Biden starts self identifying as a woman he may have a chance to fend off Trump by calling him homophobic shielding from his obvious shortcomings.