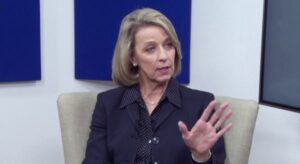 360 News Las Vegas and Political Reporter Rob Lauer filed a lawsuit in Clark County District Court seeking to enforce a public records request they served on Nevada Secretary of State Barbara Cegavske’s office back on July 7, 2021. Mind you, they have 5 business days under Nevada law to reply and comply. They never responded.

In May 2020, “Judicial Watch announced today that they received 624 pages of records from the Secretary of State of Iowa, revealing how state officials pressured social media companies (Twitter and Facebook) to censor posts about the 2020 election.”

In June 2021, 360 published an article outlining communications between the Secretary of State’s office and Facebook.  360 News uncovered a direct phone line from Cegavske’s office to FB where she could ask them to remove FB Posts that “may interfere with elections”. 360 News later learned about a secret office set up by numerous Secretary of State Offices around the country called Office of Election Cyber Security. According to reports, their mission is to monitor Posts on Twitter and FB and flag any they feel are promoting misinformation that may threaten election integrity.

On July 1, 2021 Judicial Watch successfully sued and won a case against the “Secretary of State of California showing the office directly emailed Google employees to remove a Judicial Watch video (from YouTube) on election integrity.”

On or about July 7, 2021, 360 News Las Vegas submitted a formal Nevada Open Records request to the public information officer of the Nevada Secretary of State, seeking the following public records:

Under Nevada law, the Secretary of State must respond within 5 business days to Public Requests. 360 News emailed the response at least twice, plus sent several follow up email requests and 3 phone calls. We even called the executive office directly this week. To date the SOS’s office refuses to even acknowledge 360 News’ public records request.

“The state of Nevada has some of the nation’s strongest open records laws. But time and time again we find government agencies fail to respond to requests, withhold records that are plainly open to the public or slow walk responses. The state has no legal basis to deny the requests made, they simply didn’t want to respond in this case.”

“The State of Nevada, through the office of the Secretary of State which is the office
tasked to conduct elections in the state, has an Office of Election Cybersecurity or similar office or staff which, on information and belief, has the capability to request that Facebook and Twitter
remove, review, flag or censor certain posts concerning elections or other topics.”

360 News Las Vegas and Political Reporter Rob Lauer are prepared to depose all public officials about the documents requested. 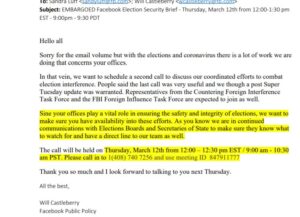