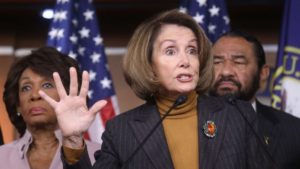 After a constant drum beat to impeach President Trump, which started before he was even sworn into office by Democrats, Republican turn out in this year’s mid-term elections will most certainly be boosted to save President Trump from likes of Maxine Waters and Nancy Pelosi,

Historically, the party out of the White House gains seats in Congressional mid-term elections. While Democrats and the mainstream media have worked overtime to fire up their base voters, they may have also fired up Republican Trump voters in the process.

There have been a handful of house seats in recent months up for grabs that Dems have won, which has given them confidence in this year’s midterm elections. But each of those elections were flooded with outside money and outside volunteers giving Dems bragging rights but they certainly are not symbolic of things to come.

In Hillary Clinton’s failed bid for the White House, she ran her campaign on hate for Trump and hate for Trump supporters, along with zero vision, zero ideas and zero energy. So far the Dems are running their mid-term election campaigns on gun control, transgender bathrooms in our public schools, letting more illegal aliens into the U.S. and onto welfare. Those core Dem issues are Republican agitator issues, meaning they will energize Republicans to get and out vote.

And then there are, Maxine Waters and Nancy Pelosi, the human gaffe machines, which have proven to be the best Republican turnout marketing tools the RNC has ever had.

Republicans have successfully, under President Trump, cut taxes which is boosting the take home pay of every American with a job, cut illegal border crossing by 77%, withdrawn the U.S. from the Paris accord, devastated ISIS, repealed the Obamacare individual mandate, put the breaks on thousands of Obama era job killing regulations, nominated 73 federal judges and won his nomination of Neil Gorsuch to the Supreme Court and much much more.

With Justice Kennedy possibly retiring this year, the balance of the Supreme Court may again be in play this election year.

So with Trump’s record of getting things done in Washington, there is the very real threat of Dems taking over the House (with just 23 seats needed to flip) and grinding to a halt Trump’s entire agenda. And House Dems will all but certainly impeach President Trump turning this election session into a race for the very survival of the Trump movement, and in many Republican’s eyes, the survival of our Republic as we know it.