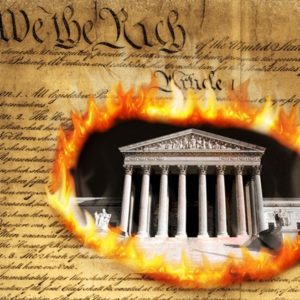 The year is 2016, seventy years after the fall of the Nazis, twenty five years after the fall of the Soviet Union. The last century government Democide (death by one’s own government) accounted for more than 200 million deaths. America defeated the external enemies of freedom. America defeat tyranny around the world at great cost over the past 115 years.  So what happened to our freedom?

Oh you still think you’re free? You think America is still a constitutional republic? Are you free to start a business without the government’s permission, i.e. zoning, licensing, a mountain of paperwork and regulations and so on? Are you free to build a house for your family on your land without government’s permission? Can you invest your own money the way you want? Can the IRS steal your money without criminal charges with a sealed secret court order? Can you go about your daily life without government cameras watching you at every street light? Can you privately email your friends and family without the government reading them? Can your kids eat whatever you send them to school with in their lunch bags? Can a police officer take your cash without probable cause on a routine traffic stop? Are you really innocent until proven guilty? Can you freely express your beliefs outside the office without fear of losing your job? Can you buy the health insurance you want without government permission? Can you send your kids to the school you choose? Are the people in government accountable to anyone when they commit crimes?

Over the past 30 years we have seen the consolidation of the government’s power at the expense of individual liberties. While people have been occupied with pizza, beer, football and porn the government has, little by little stolen our freedom. Liberals have placed judges in courts that support new powers government has claimed for itself. Powers we as people used to have. The power over our property, over our healthcare choices, over our kids’ education, over our ability to earn a living, over our ability to defend our very lives with a gun and so on. Speak up at a School board meeting and you could be arrested and hauled away.

The purpose of our government is to protect, defend and expand human freedom, not to protect us from ourselves. We have to wear seatbelts and helmets and eat less salt and soda or else. We can’t talk on our cell phones while driving because one tenth of one percent of drivers might cause an accident.

And just try and fight these rules and the media, the IRS and every government agency will come down on you like a ton of bricks looking for any reason to charge you with a crime or boycott your business or state.  There are over 5,000 new criminal laws on the books now. We have so many laws that we are all criminals if we become a threat to the government.

While we play fair those inside government play for keeps. While many of us want to believe our system of checks and balances will correct the wrongs and protect our rights we see judges, courts and elected officials destroying our individual freedoms.

Right now the government has all your bank records, credit card records, cell phone records, mail records, phone call content, healthcare records, education records, every comment or post you every did on social media, your physical location at almost every moment over the past 14 years thru your smart phone, a list of all your friends and family, every single bank transaction and credit card transaction and even your dog’s name. You still think you are free?

According to liberals, freedom means a thirteen year old has the right to get a government funded abortion without her parent’s knowledge and dudes are free to use girls’ showers and bathrooms in our public schools. According to the US Supreme Court ruling this week, those activities are protected somewhere in the Constitution and States cannot even regulate the abortion clinics’ health standards.

Liberals have launched an attack on all our constitutional rights over the last hundred years which has accelerated over the last 7 years with the help of a compromised Republican Party.

Freedom of speech– Only applies to gays and liberals, but white Christian males need to just shut up and sit down. We have seen white males lose their jobs for simply supporting causes liberal opposes in their private time.

2nd Amendment– What gun rights? According to liberals only the government has the right to bear arms.

Every single amendment has been compromised by the courts in favor of more government power and has carved out exceptions in direct conflict with the Constitution.