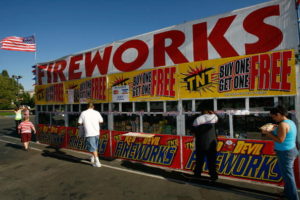 First, I really don’t believe the government’s story that this was an accident. I suspect the fireworks may have been used as a bomb to go off and cause harm exactly how and where it went off. The liberal media in New York is nuts enough to cover this up rather than further tarnish the image of Islamic terrorists. Remember, this Mayor banned the Police from watching Mosques in New York with ties to terrorism.

Second, these same liberals have been yelling for the past 2 weeks, since the Orlando shooting, we need tougher gun control laws in America. This fireworks bomb kinda shoots a big hole in their argument. For all you people educated in public schools let me explain it to you. If terrorists are using fireworks as bombs then obviously guns are not the problem, radical Muslim Terrorists are the real problem and that means bye bye gun control laws.

And btw the former Mayor of New York, Bloomberg, is pushing a background check law petition here in Nevada on the ballot this November. Maybe we need to do background checks on the people coming into our country instead of limiting the rights of law abiding citizens Mr. Bloomberg?