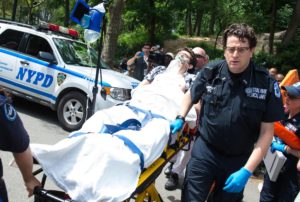 Liberal New York City officials quickly trying to spin a possible terrorist attack, are now calling it a “Home Made” experimental explosive device that blew off an eighteen year old kid’s foot yesterday on 5th ave and 68th street near Central Park. They are saying the device was pressure sensitive and was probably left by some “explosive enthusiast. “We believe this could have been put here as some sort of experiment,” NYPD Inspector John O’Connell said during a news conference.” In the military we called that an IED (improvised explosive device). IEDs were responsible for thousand of serious injuries and deaths of US forces in Iraq and Afghanistan during the  war. IEDs were the favorite weapon used by Radical Islamic Terrorists in the war and are still the weapon of choice jihadi cowards.

The fact is, there’s no possible way a explosive device could blow up without a spark from a trigger or a pressure switch. Science 101. Obviously not taught in Common Core Public schools anymore.

Holocaust survivor Eli Wiesel’s funeral was literally across the street, but nothing to see here folks. Move along move along.

It’s time Americans start questioning people in authority again and use their common sense. The official story requires leaps and bounds to twerk the facts.