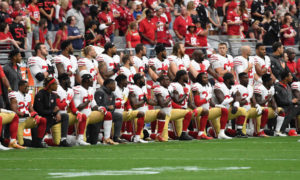 Even after the world witnessed Las Vegas Metro Police officers’ bravery running into the Mandalay Bay to stop the shooter last week, NFL players (49ers) had the nerve to continue to protest police by taking a knee while the National Anthem was playing today.

It was so offensive that Vice President Pence actually got up and left the Colts game today. Pence refused to stay and watch the NFL game.

According to the players kneeling, they are protesting police brutality and killing of blacks in American by cops.

Note, we used a picture of the 49ers kneeling from last week because it appears the NFL has blocked out any pictures of the players kneeling this week. 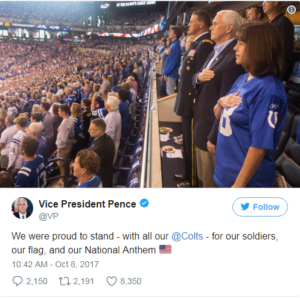