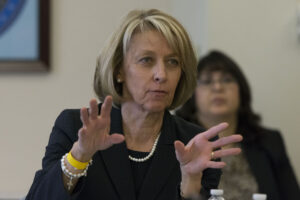 On March 24, 2020, supposedly in response to the COVID-19 pandemic, Republican Secretary of State Barbara Cegavske bent to demands by Democrats and state administrators and announced a plan essentially to abolish in-person voting and conduct, instead, the June 9, 2020 primary election by universal mail-in balloting. According to the plan, all active registered voters in Nevada automatically will be mailed a primary-election ballot for mail-in voting. Voters are not required to take any action or steps, such as submitting an application, in order to receive a ballot, as required in traditional absentee balloting.

On April 16th, in a separate state court lawsuit, Nevada Democrats sued to force Secretary Cegavske to mail ballots to every name in the voter registry, not just active registrations. Additionally, they seek to weaken current state rules that invalidate ballots because of mismatched signatures and prohibit vote harvesting.

The final hearing on the merits of the federal case was heard Wednesday, April 28th.  The Nevada voters, True the Vote will immediately file with the US Court of Appeals.

Obama Appointee Federal Judge Miranda DU ruled against the Trump group an din favor of the DNC and NV sec of State Barbara Cegavske, allowing the mail in ballot election in June to proceed.

True the Vote President Catherine Engelbrecht said “Nevada’s election laws already provide for absentee balloting, so voters who want to cast their ballot by mail can still do so. We are fighting to preserve options, to preserve checks and balances, to preserve integrity of process. Universal mail out of ballots to active and inactive voters, watering down security provisions, and encouraging unlimited ballot harvesting by special interests groups reads like a recipe for absolute and intentional election chaos.”

We’re asking all American voters to stand with us in defense of voters’ rights. Make no mistake, if we do not act now to preserve our liberties, they will be taken from us.”

James Bopp, Jr., of The Bopp Law Firm PC, lead counsel for the Nevada Voters, and General Counsel for True the Vote Voters’ Rights Initiative says: “There are national implications for voters nationwide. There is no precedent for such an extraordinary bureaucratic action to overturn laws passed laws by the Legislature to regulate voting in state elections and to put the bureaucrats in charge. Should these politicians succeed in Nevada, it would create a precedent for others to follow and to impose similarly unprotected and unrestricted voting procedures though bureaucratic fiat.”