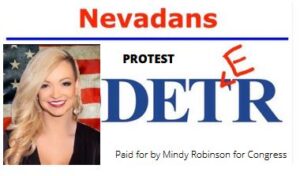 Nevada has over 3.1 million residents and a work force of over 1 million. Over 80% of the economy is shut down under Gov. Sisolak’s Emergency Orders which he is extending again for months.

According to DETR officials, “Nevada unemployment office was overwhelmed by a record 93,000 applications filed the week after the Governor Sisolak ordered businesses closed. Another 71,400 Nevadans sought unemployment the following week.

As of April 20, 2020, DETR Director Tyler-Garner said “We’re expanding our resources daily to respond to demand. We’re increasing staffing, hours and technology support. We’ve never seen anything like this, and a lot of people are focusing on us getting through this workload.”

The system is still overwhelmed as of April 29, 2020, some estimate the number of unemployed in Nevada could easily top 600,000, especially if one includes contract workers and the self employed and business owners. Yet only yesterday did Gov. Sisolak finally acted and fire Director Tyler-Garner.

CD 3 Republican Candidate Mindy Robinson is leading a protest tomorrow at 10:00 a.m. at the DETR offices located at 2800 St. Luis Ave Las Vegas NV, also participating in the protest is the nonpartisan group “Worker Victims of by Nevada Government”. 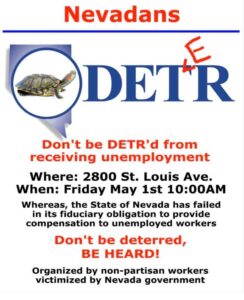